Türkiye as a culturally and historically rich country offers a lot to its visitors. Turkish hospitality welcomes more than 35 million visitors every year. Detailed information about some of the famous places in Türkiye is available below. To have more detailed information about Türkiye, you can visit Tourism and Travel Guide to Türkiye of Republic Ministry of Tourism https://goturkiye.com 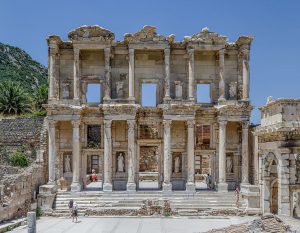 Ancient City of Ephesus
The ancient city of Ephesus was valued for a long time as a harbour town, and many famous classical philosophers, who are still read today, such as Heraclitus, lived in the scientific, artistic and cultural city of Ephesus. The ancient city of Ephesus, and especially its Temple of Artemis, one of the first temples, is recognised as one of the seven wonders of the world and since 2015 it has been included in the ‘World Heritage List’.
It is believed that Ephesus was founded as far back as 6000 BC and was built to pay homage to Artemis, the fertility goddess. The city was the capital of Hellenic Greece, one of the 12 cities of Ionia during the Classical Greek period, and the capital of the Roman Empire’s province of Asia. The ancient city of Ephesus was built in four separate main areas: the Ayasuluk Hill, Artemision, Ephesus and Selçuk. Within the boundaries of the city are extremely valuable buildings, monuments and artefacts including the Temple of Artemis, the Celcus Library, House of the Virgin Mary, the Cave of the Seven Sleepers, the İsa Bey Mosque, the Prytaneion (Municipal Palace), Domitianus Square, St. John’s Castle, the Temple of Hadrian, and the Basilica of St. John.
One of the meeting halls of ISUCRS 2022 scientific program is named as Ephesus. 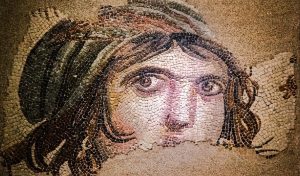 Zeugma
Situated in South-eastern Türkiye, Zeugma, literally “bridge” or “crossing” in ancient Greek, owes its name to the fact that it was located at the major ancient crossing point on the river Euphrates. Zeugma was founded in the early 3rd century BC on the site where he had the first bridge over the Euphrates built In 64 BC, the Romans controlled the city. Zeugma was of great importance to the Romans as it was located at a strategically important place. Up to 70,000 people lived in the city, and it became a center for the military and commerce for the Romans.
In late antiquity, Zeugma was a diocese, but the place seems to have been abandoned in the 7th century due to Persian and Arab raids. Arabs lived there temporarily in the Middle Ages, and in the 17th century the Turkish village of Belkis was built near the ruins. Today Zeugma has been on the UNESCO World Heritage Site tentative list since 2012. Extant archaeological remains at the site include the Hellenistic Agora, the Roman Agora, two sanctuaries, the stadium, the theatre, two bathhouses, the Roman legionary base, administrative structures of the Roman legion, the majority of the residential quarters, Hellenistic and Roman city walls, and the East, South and West necropoles.
Zeugma Mosaic Museum whose mosaics focus on Zeugma is the biggest mosaic museum in the world. The famous “Gypsy Girl” is one of the mosaics of the museum.
One of the meeting halls of ISUCRS 2022 scientific program is named as Zeugma.

Cappadocia
Cappadocia, one of the most amazing places on earth… With its valley, canyon, hills and unusual rock formation created as a result of the eroding rains and winds of thousands of years; whole area stands as natural open air museum. Pigeon Valley, Esentepe Open Air Museum, Paşabağlar, Avanos, Kaymaklı Underground, Sinasos Town and Three Graces in Urgup are the famous sites to be visited in Cappadocia. 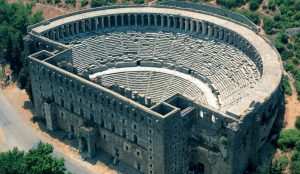 Perge – Side – Aspendos (Antalya)
Ancient City of Perga: In the 12th century BC, there was a large wave of Greek migration from northern Anatolia to the Mediterranean coast. Perga’s most celebrated ancient inhabitant, the mathematician Apollonius. Roman rule began in 188 BC, and most of the surviving ruins today date from this period. Its ruins include a theatre, a temple of Artemis and two churches. The very famous temple of Artemis was located outside the town. Aspendos Theatre: The theatre of Aspendos is one of the best preserved theatres of the Roman world. The history of the city goes probably back to 1000 BC. It was built in the period 161 – 169 A.D. on the south-east slope of the hill on which the ancient city was developed. According to bilingual inscriptions the construction was maintained by A. Curtius Crispinus. At the same time another inscription mentions Zeno as the architect. It is one of the few roman buildings of which the name of the architect is known. Aqueduct & Bridge: Aqueduct is among the monuments of Aspendos city. It was built on the north to bring water from the mountains to the city. The aqueduct has two towers which have 30m height ascended with stairs, which was built to release the air accumulated in the system and to adjust pressure. 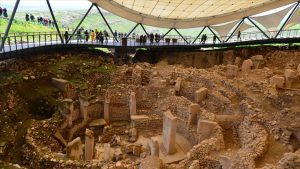 Gobeklitepe
Archaeologically categorised as a site of the Pre-Pottery Neolithic A Period (c. 9600–7300 BC) Göbeklitepe is a series of mainly circular and oval-shaped structures set on the top of a hill. Excavations began in 1995 by Prof. Klaus Schmidt with the help of the German Archeological Institute. There is archelological proof that these installations were not used for domestic use, but predominantly for ritual or religous purposes. Subsequently it became apparent that Gobeklitepe consists of not only one, but many of such stone age temples. Furthermore, both excavations and geo magnetic results revealed that there are at least 20 installations, which can be called a temple

Sumela Monastery
Sumela (the name is derived from nearby Mt Melat) was founded in the 4th century AD and abandoned in 1923 after the creation of the Turkish Republic and the ‘exchange of populations’. When the monastery is open again, the main church, formed from a natural cave and built in the shape of an extended apse, is the high point of a visit here. It is covered both inside and out with colorful frescoes depicting everything from the Virgin Mary to the Last Judgement. The earliest examples date from the 9th century, but most are from the 19th century. Sadly, many have been defaced, some deliberately and in recent times.

Istanbul and Türkiye offer unique places to its visitors.
Daily tour options and pre/post congress tour options for an unforgettable experience will be announced.